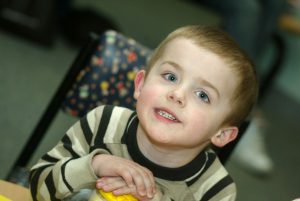 Duchenne muscular dystrophy is the most common fatal genetic disorder diagnosed in childhood, affecting approximately 1 in every 3,500 – 5000 live male births, with about 20,000 new cases diagnosed worldwide each year. DMD is caused by a mutation in the gene for dystrophin, which is located on the human X chromosome. This protein is an important component within muscle tissue that provides structural stability to the cell membrane.  It is a progressive disorder that causes muscles to become weaker over time until it affects the whole body. DMD primarily affects boys, the condition in girls tends to be milder, and occurs across all races and cultures.

Duchenne is often diagnosed between the ages of two and seven. A child with DMD may have difficulty walking, running or jumping and have difficulty standing up. They may learn to speak later than usual, be unable to climb stairs without support and could have behavioural or learning difficulties.

This project has received funding from the European Union’s Horizon 2020 research and innovation programme under grant agreement number 667078.

To find out more about the project contact us at vision-dmd_team@ceratium.eu